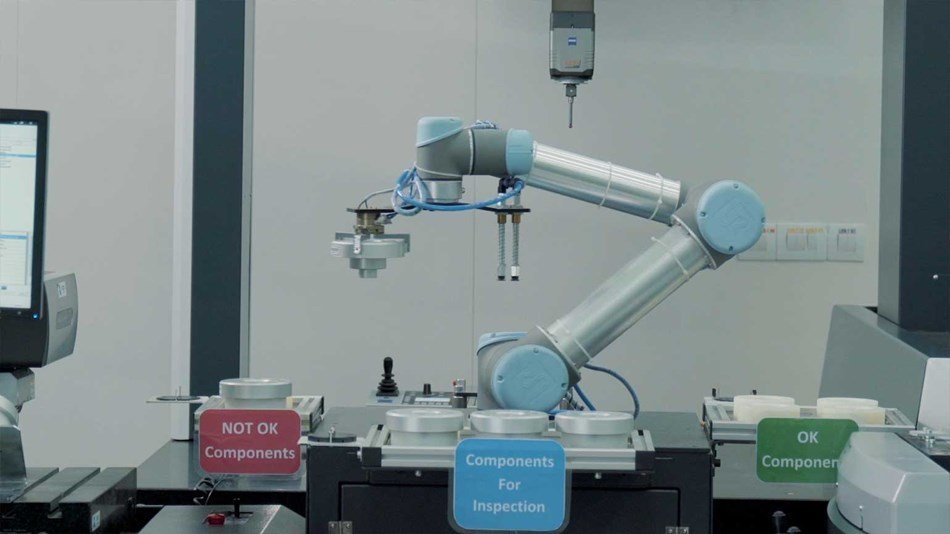 In an effort to solve the issues created by changing production lines with manual loading systems, the ZEISS Metrology Centre, part of Carl Zeiss India (Bangalore) Pvt. Ltd, installed a UR5 cobot, which increased the company’s machining utilisation by over 90% and gave it the ability to manufacture 24×7. A single cobot arm now tends three metrology machines in the same cycle.

Carl Zeiss India Metrology Tech Centre in Bangalore used to have cumbersome manual loading systems that were problematic and inflexible when changing production lines, creating many operational problems.. Their use was also limited to the presence of staff. A total of 15-20 employees make up the Metrology Tech Centre in Bangalore, with only one operator who could operate a single machine at a time, thereby limiting productivity. Carl Zeiss India realized they needed to automate repetitive production tasks in a seamless manner with an agile, automation solution that would enable them to manufacture around the clock.

The UR5 gave Carl Zeiss India the flexibility to integrate three machines with a single cobot, resulting in increased productivity, which skyrocketed from 50% to over 90%. The cobot also allowed for adaptability through seamless, problem-free switches in productions line that can be easily done in a day or two, making 24×7 operations a reality.

A single UR5 integrates three metrology technologies: CMM, contour machine, and a non-contact measuring machine. The cobot scans the barcode of every component and places it in each of these machines to be checked according to the relevant program. After the inspection, the measuring machine sends the information to the cobot regarding whether or not the component is fit for use. The cobot, in turn, sorts the part accordingly, either placing it in the ‘’Okay’’ or the ‘’Not Okay’’ bin.

“We had a productivity of 50% with an operator. But now, when integrating this system with a cobot, you can expect more than 90% utilisation of the each machine. This gives a neat and flexible system which can be adapted in just a day or two for a new system. . I think this is where we have to be looking at cobots being applied to automation. The future is great with cobots! Even while looking at 24×7 productivity, the only solution is with cobots.” Ravikumar Sirige, Division Manager, Industrial Quality Solutions, Carl Zeiss India

Read on and watch the case study video