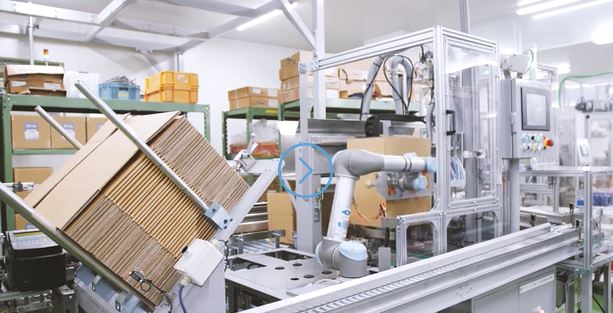 Thanks to Universal Robots for sharing this great new Case Study, very interesting to read about the challenges this toothpaste producing company had and how they found an efficient solution:

NIPPON ZETTOC CO. LTD., whose main business is the OEM of toothpaste, introduced UR cobots to solve labor shortages on their packaging and box erecting line while maintaining a stable production. The company sped up packaging production 30% by flexibly using the UR cobot, featuring superior operability and customizability, built a production line that can change production capacity based on the order status.

Mr. Sadao Jimbo, the President and COO of NIPPON ZETTOC CO.,LTD., points out the company’s challenge: “We currently have 340 to 350 staff at our company, but it is very difficult to recruit employees especially for factories.” Since the main business of the company is the OEM production of toothpaste, not being able to operate the production line and produce products due to labor shortages would result in lost business.
Also, Mr. Junichi Kano, manager of NIPPON’S Production Technology Department states: “People can work flexibly, but of course there are negative points such as the fact that they may suddenly take off from work and there are differences in skills,” he says. “Therefore, our goal is to make a line that incorporates the best features of people and robots.”

When Mr. Kano visited a factory in Germany, he was impressed by the UR cobots placed in various spots of the production lines and decided to introduce Universal Robots at NIPPON ZETTOC.
Since the company’s factory needs to produce small quantities of various types of products using a single production line, it is important that the cobot’s end-effector can be changed depending on the product type. Producing the end-effector in-house enabled the company to easisly change between product types.

As a result, the inner-box packing line, which used to require two people, now has one person and four UR5 cobots, enabling NIPPON to keep the production line running while workers take breaks. Installing the UR5s also sped up production, resulting in a 30 percent increase in the number of products packaged per hour. The outer-box packing line, which used to require a person tending it, is now fully automated by a UR5. The operators of these lines are now doing different, more value-added tasks such as material supply and process inspection.

Mr. Hirotaka Sugawara, Engineer of Production Technology Department says: “Safety is also taken into consideration. By using a hollow design and intentionally decreasing the strength, the robot hand is designed to when colliding with a person.”
Considering these operation and safety parameters, it took approximately 3 months to develop the whole production system. One month for design, one month for assembly and installation, and one month for programming. “It took time as it was the first time, but we should be able to do this quicker next time,” Mr. Sugawara says.

The programming training was provided by the authorized distributor Inaba Denki Sangyo Co., Ltd. “In addition to receiving thorough training sessions, we have also been able to learn a lot from plant tours at other companies,” says Mr.Sugawara, adding that NIPPON is aiming to increase the number of in-house employees capable of handling cobots in the future.

NIPPON expects the return on investment to be approximately 2 years. “In our industry, it normally takes 3 years, but as we can save money by in-house programming, we can achieve our ROI in a shorter period,” says Mr.Kano